Skip to main content
THIS IS AN ARCHIVED SITE
This site contains information from Dec 2014-Jan 2017. Visit the current Commerce.gov site.

On Sunday, April 24, President Barack Obama and U.S. Secretary of Commerce Penny Pritzker arrived in Germany to kick off the 2016 Hannover Messe, the world’s largest industrial trade fair.  For the first time since the fair’s inception in 1947, the United States served as the official partner country.

As “America’s Innovation Agency,” the Department of Commerce led the U.S. efforts to promote America’s world-class businesses, products, innovations, and investment climate for this year’s Fair, themed “Integrated Industry – Discover Solutions.” The U.S. delegation included about 430 companies, research institutions, and economic development organizations, making it by far the largest group of exhibitors that the United States has brought to Hannover Messe.

However, Hannover Messe is more than just a trade show. This visit also underscored the U.S. commitment to trade and investment as drivers of job creation and economic growth on both sides of the Atlantic. Hannover Messe provided an important opportunity to address key issues facing the U.S.-Germany and U.S.-European relationship, including the Transatlantic Trade and Investment Partnership (TTIP), the EU-U.S. Privacy Shield, and the Digital Single Market.

In Hannover, Secretary Pritzker met with Chancellor Merkel and participated in a number of events focused on critical aspects of U.S.-German and  U.S.-EU cooperation, including workforce development, the digital economy, and trade. After joining President Obama and Chancellor Merkel at the opening of the U.S. National Pavilion and for a tour of the trade show floor, Secretary Pritzker discussed the opportunities and challenges presented by the digitization of industry during a panel discussion at the U.S.-German Business Summit.

Secretary Pritzker later promoted the importance of U.S.-German collaboration and touted the benefits of the Transatlantic Trade and Investment Partnership (T-TIP) during an armchair discussion with Siemens USA CEO Eric Spiegel. Siemens, a German company with a large U.S. footprint, welcomed Pritzker and many of their U.S.-based customers to the event designed to celebrate the commercial relationship between the U.S. and Germany.

Workforce development is an important issue that Secretary Pritzker and the Department of Commerce are addressing for the very first time, having created the ‘Skills for Business’ agenda. Pritzker joined Germany’s Minister of Education and Research Johanna Wanka Monday afternoon for a panel discussion on this topic, highlighting further opportunities for the two nations to cooperate on efforts to promote vocational education and training.  In 2015, the U.S. Departments of Commerce, Labor, and Education entered into a formal partnership with their German counterparts to import, adapt, and expand their proven apprenticeship models into the United States.

Secretary Pritzker delivered remarks at a European Commission (EC)-organized conference on digitization and digital technologies.  Secretary Pritzker presented the U.S. perspective on key issues related to digitization, and highlighted the critical role that the EU-U.S. Privacy Shield and the Digital Single Market play in spurring innovation, and boosting the transatlantic digital economy.

Following the European Commission conference, Secretary Pritzker participated in a panel discussion featuring U.S. and German small business owners to discuss how TTIP can benefit small and medium-sized enterprises (SMEs) on both sides of the Atlantic.

In addition to holding a bilateral meeting with German Vice Chancellor and Minister for Economics and Energy Sigmar Gabriel, Secretary Pritzker engaged with representatives from the more than 430 companies and organizations in the U.S. delegation, as well as the incredible sponsors who helped to showcase American innovation and ingenuity on an international stage.

Secretary Pritzker also traveled to Hamburg to tour the Port of Hamburg and discuss the critical role that infrastructure plays in boosting competitiveness, economic growth, and job creation on both sides of the Atlantic.  Secretary Pritzker visited Cisco’s Smart City Showroom, to learn how innovation can help alleviate infrastructure challenges, and to explore opportunities for further public-private sector partnerships. 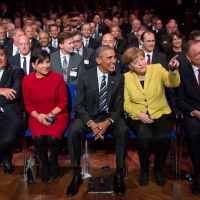 Slide Image
After opening the U.S. National Pavilion on the first day of Hannover Messe, President Barack Obama, German Chancellor Angela Merkel, and Secretary Penny Pritzker took a tour of the trade show floor. Here at the Ohio booth, they examine a prosthetic hand produced by a 3D printer used by many students and businesses. more info | view original
https://2014-2017.commerce.gov/sites/commerce.gov/files/web_potus_at_us_pavilion_3.jpg

Slide Image
For the first time since its inception in 1947, the United States is the official partner country for Hannover Messe, the world’s largest trade fair for industrial technology. more info | view original
https://2014-2017.commerce.gov/sites/commerce.gov/files/web_susa_pavilion.jpg

Slide Image
On April 24, 2016, U.S. Secretary of Commerce Penny Pritzker delivered remarks at the Federation of Germany Industry’s Economic Forum, her first event at the 2016 Hannover Messe. The forum provided an opportunity for public and private sector leaders in both the U.S. and Germany to discuss the event’s theme, “The Future of Advanced Manufacturing.” more info | view original
https://2014-2017.commerce.gov/sites/commerce.gov/files/_dsc2183.jpg

Slide Image
The SelectUSA Partner Country banner is displayed outside the Hannover Messe halls in Hannover, Germany. This year is the first time the U.S. has served as the the official partner country for the fair since its inception in 1947, and the first time a sitting U.S. president has participated. more info | view original
https://2014-2017.commerce.gov/sites/commerce.gov/files/web_outside_the_fair_with_flowers_-_photo_by_mbda.jpg

Slide Image
Secretary Penny Pritzker delivered remarks at the Digital Transformation of Industry Conference hosted by the European Commission (EC) during the 2016 Hannover Messe. The conference provided a forum for public and private sector leaders in both the U.S. and Europe to discuss the opportunities and challenges presented by the digitization of industry. more info | view original
https://2014-2017.commerce.gov/sites/commerce.gov/files/web_digital-ec3.jpg

Slide Image
Secretary Penny Pritzker participated in a panel discussion about TTIP, energy markets, and digitization during the U.S.-German Business Summit, co-hosted by the Federation of German Industries (BDI) and the U.S. Chamber of Commerce at Hannover Messe. She was joined on the panel by Günther H. Oettinger, EU Commissioner for Digital Economy & Society; Joe Kaeser, CEO of Siemens AG; and Andrew Liveris, CEO of the Dow Chemical Company. more info | view original
https://2014-2017.commerce.gov/sites/commerce.gov/files/web_us-german_biz_forum_4.jpg